A definition of farmland flowers

In French, farmland flowers are more scientifically referred to as “messicoles”. This term (from the Latin messis = harvest, and colere = to live) defines annual plants that are closely linked mainly to winter-germination cereal crops (wheat, oats, barley, rye, etc.). They follow the life cycle of these crops: ploughing and sowing in autumn, germination in winter, growth in spring, harvesting in summer. That is why they are sometimes also referred to in French as "habitantes des moissons" (harvest denizens) or "compagnes des moissons" (harvest friends).

...but not just of the harvest!

Other, generally hardy, species are linked to permanent crops and can be found in orchards, vineyards and olive groves, etc. (Tulipa agenensis, Tulipa radii, etc.)

Farmland flowers: witnesses to the history of agriculture

Since the invention of agriculture, eight millennia before our time, in the fertile crescent of Mesopotamia, plant cultivation went hand in hand with the development of human societies.

The “domestication” of food plants, on which our diets are based, such as cereals, and the propagation of agricultural practices generated a new type of habitat: the cultivated field.

Wild annual species requiring loose soil to germinate gradually filled this new type of space, characterised by a seasonal rhythm and a marked productive dimension: these are farmland flowers.

Agricultural changes have revealed their fragility

Farmland flowers have experienced a stark decline over the past 50 or so years. Many are under threat of extinction and some have indeed become completely extinct in the area. Closely linked to the crops amongst which they grow, they are inevitably affected by changes to agricultural practices and the abandonment of crops.

In France, there are 102 plants on a national list drawn up by the National Botanical Conservatories and experts. 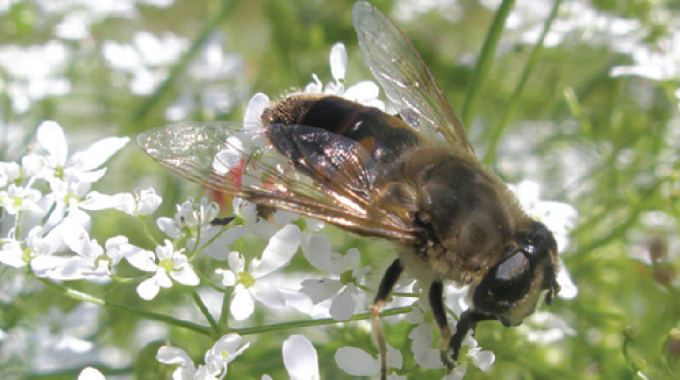 The place of farmland flowers in the ecosystem

The decline in farmland flowers has an impact on all countryside biodiversity: associated insects and pollinators, granivorous and insectivorous birds, crop pests, etc. 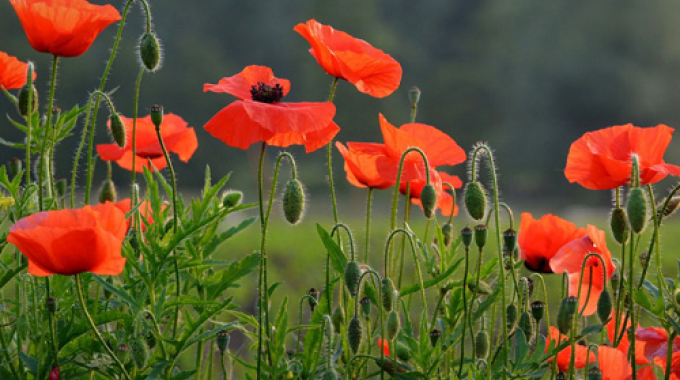 However, certain plants such as the Poppy (Papaver rhoeas L.) remain relatively common as these are better adapted to diverse habitats: ditches, roadsides, fallow land, etc.

Included in the category of so-called weeds...

Farmland flowers are part of the group of plants referred to as “weeds” by farmers and gardeners. A “weed” is a plant that is undesirable in its location, in particular referring to wild plant species growing in cultivated environments. This term covers some 1,200 annual, biennial and hardy species, found in gardens, banks, fields, orchards, ditches, embankments, etc., which one generally seeks to eliminate.

Farmland flowers are just a tiny fraction of these !

Have you heard of “weed science”?

This is the science studying these so-called weeds !

Although the term “weed” is sometimes used, one also hears the term “self-propagating plant” or “plante adventice” in French (the French term “adventice” comes from the Latin adventicius: coming from elsewhere, unexpectedly / accidentally), which in agriculture is used to refer to all plants that grow accidentally, and therefore unintentionally, in crops without having been sown.

A genuine concern for farmers

Admittedly, these self-propagators have never had good press. From early on, the agricultural community felt the need to rid crops of these undesirable intruders, which have adverse effects. In too great a number, they compete with the cereal crops by appropriating the water and nutrients in the soil, to the detriment of the latter. "A weed kills three good ones and takes the place of a fourth!” said Deputy Jacques Bujault (1771-1842), farmer and moralist of his time.
Besides, the root system of some is formidably dense! Nearly 6 kilometres of roots placed end to end for a single stem of Wild oat (Avena fatua L.)!
We should also note that the development of diseases can be encouraged by the damp microclimate maintained by the presence of self-propagators. This increased moisture in the grain requires farmers to ventilate their crops, which can prove expensive.

A question of balance for biodiversity

Wanting to remove all self-propagators is not acceptable for the balance of biodiversity. However, leaving them uncontrolled is not a tolerable solution either given the aforementioned consequences.

Practices that explain their obliteration

For centuries, seeds were sorted onsite at the farm, first manually, then using increasingly sophisticated sorters. Sorting was rarely perfect and sometimes farmers would re-sow some of the farmland flower species, using grains from the farm.
Current techniques make this much less frequent. Nowadays, farmers rarely use their own seeds, instead they buy in grains seeds that meet very strict standards (cleanliness, germination rate, etc.).

The evolution of cultural techniques

Agricultural research has increased our understanding of the physiology of cereals and self-propagating plants, helping farmers to make better choices in terms of their ploughing and sowing periods to increase their yields. So, depending on the environment and type of soil, farmers can use external nutrient inputs that directly benefit the cereal plants and not the farmland flowers (for example, very frequent calcium input in the soil).

Use of herbicide products

Agricultural researchers and experts agree in saying that the use of herbicides has been the most effective cultural practice in the fight against self-propagating plants.
It has also been the most effective at eliminating farmland flowers! These herbicides destroy the roots, stems, leaves, etc. but also the embryos sleeping in the soil, which are eliminated as soon as they germinate.
Susceptible to herbicides, uncompetitive and unable to adapt to other environments, farmland flowers have been the first to suffer the effects of these control techniques. A number of them are now under threat of extinction.
Other self-propagating species, on the other hand, have developed resistance and remain very harmful to crops.

There is still time to save them

The issue of farmland flower extinction is part of the movement to raise awareness on the importance of biodiversity initiated at the end of the 20th century at the Earth Summit in Rio de Janeiro in 1992 and is still at the heart of global concerns with the Biodiversity COP.
The fact that these plants do not grow in natural environments, but within cultivated and private spaces, has been largely overlooked in public plant protection measures by national and European regulations: Interministerial Order of 20 January 1982 and Community Directive CEE 92/43.

Although protection measures in France stipulate that it is prohibited to cut, destroy or pull up certain plants under threat in their natural habitat, this does not apply to “generally cultivated plots”.

As a result, farmland flowers, however rare, are not protected by the regulations, as their continued presence in our fields is actually linked to shallow tillage, crops and seed transport, in short, to agricultural activity.
It was therefore in 2000, in France, that the first national action plan was drawn up by the French Ministry of the Environment for the conservation of farmland flowers. National action plans (PNA) have been put in place to complement the species protection policy based on regulations prohibiting a range of activities (destruction, cutting, mutilation, purchase and sale, species habitat alteration, etc.).
A status report for these plants was produced, in order to introduce safeguarding measures: technical assistance, introduction of good practices and tools required for field-based conservation, aimed at those involved in rural activities (farmers, natural space managers, researchers, agricultural teachers, naturalists, etc.).
However, there have been few conservation initiatives and these have been geographically limited.
These regulations do not address all the issues in terms of species conservation and protection and certain species, among the most threatened, require the introduction of active measures to prevent their extinction.

In France, a national action plan (PNA) supporting farmland flowers was put forward for an initial period of five years (2012/2017). 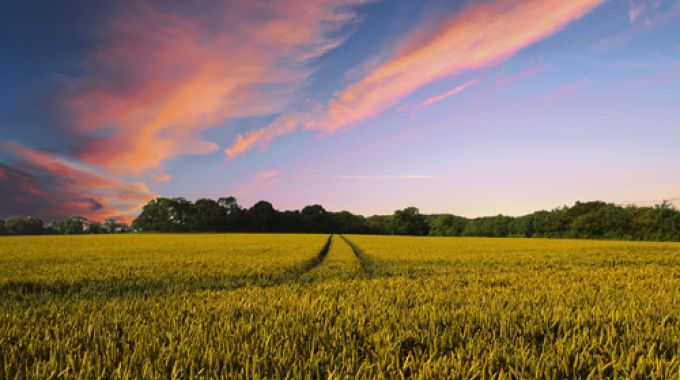 The PNA strategy consists in :

This makes it easier to find out about the evolution of biodiversity in the rural environment, linked to agricultural practices.
It is important that everyone is made aware of the environmental concerns but also helped in financial and practical terms to conserve this biodiversity.
Many other countries have developed similar policies and action plans are now recognised as an essential policy in nature conservation.

Farmland flowers, for the benefit of nature and mankind

In line with the concept of preserving plant biodiversity, this protection comprises several aspects, in particular :

Farmland flowers are a symbol of rich agriculture, rooted in areas where the land is full of life and offers beautiful landscapes. The disappearance of these plants therefore represents a deterioration of the environmental landscape and, more philosophically, raises the issue of sustainable and ethical development.

Heritage of our collective memory

Harvest flowers are part of our collective memory. Cornflowers and Poppies are the flowers of the French Nation, symbolising the blue and red of the French flag. They are also the flowers of remembrance.
They are part of a certain aesthetic of the rural landscape.
Their colours, in particular, have inspired many painters (Monet, Van Gogh, Klimt, etc.).

Nearly all these plants have been or are currently used as medicinal, food or horticultural plants.
For some, they present useful properties for mankind and for our developmental needs.
It is therefore important to conserve this rich plant biodiversity, which constitutes future potential.

Their gradual disappearance is generating a loss of rich biodiversity. It is therefore necessary to work, firstly, for the preservation of nature and, secondly, for the survival of species enfeoffed to crops (insects, birds, etc.), which also play a role in the smooth running of our agricultural systems.

Offering a flower to all pollinators

The protection of farmland flowers as part of an approach aimed at increasing pollinating insect populations. Very diverse pollen and nectar species attract many insects, which facilitate the reproduction of almost all plant species. 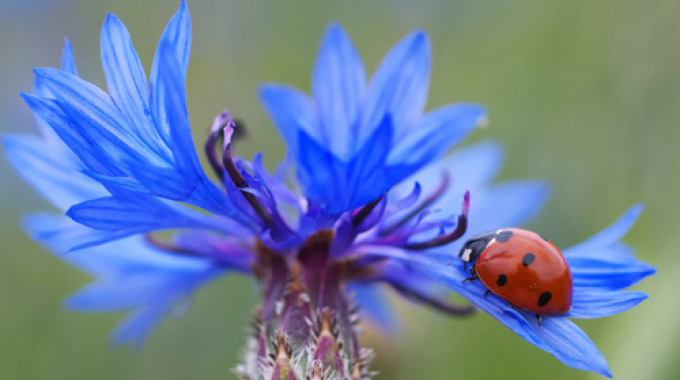 Beekeepers are also very happy to find bees gathering pollen. Cornflowers and Chamomiles help bees make excellent “all-flower” honey.
Our harvest flowers also play a key role in the biological fight against crop pests, as they attract insects (ladybirds, spiders, etc.), which can combat aphids and other predators. This all helps to preserve the biodiversity we hold so dear.
Trials carried out in nature and in certain habitats have widely demonstrated that diverse plant life helps maintain the ecological balances through the presence of insects, butterflies, etc. New plants may even reappear.

80% of species cultivated in Europe are pollenated by insects.